Caring, affection and love are the thresholds for life according to Quran for kids it is necessary that they should know the importance of relations and the rewards for keeping this relationship alive.  Every act with relatives which is considered as good in the eyes of common people is called as binding of Kinship. Even a priceless act or minimal act such as saying greeting or reply the greetings is also counted as binding of Kinship. There is no thumb rule that we can specify the acts which lead to binding of Kinship. It varies from area to area, tribes to tribes and country to country. In some parts of Pakistan shaking hands and then placing right hand on the own chest is considered as an expression of affinity and love. In Iran kissing on cheeks is considered as an expression of affinity and love and in Kingdom of Saudi Arabia touching cheeks with each other is taken as a symbol of affection. Warmly reply on email, sms, commenting on facebook or twitter can be taken as symbols of caring, affection and love.

Binding of Kinship is not only make the life easy in this world but also it will facilitate in the life afterwards. It is said that if you want to succeed in aakhirah always hold the relation of kinship. even if you do not have any thing , present a smile , or present a glass of water. It is a common tradition that people prefer rich over poor. A rich is taken as more deeper relative and people behave him in good manners and misbehave with poor. According to shariah there is no difference between rich relative and poor relative. Relation is strong with relationship and not with wealth. If someone prefers rich relatives on poor relatives , he / she actually giving the preference to wealth , he /she is not giving the preference to relationship. A poor relative has more rights than a rich relative if poor is more closer with respect of relationship. If a poor is a relative of far relationship and rich has near relationship, then no doubt rich has more rights however in such case one should do some favor and kindness with poor relatives.

Hadhrat Sajjad ( son of Imam Hussain A.s) narrated that two steps are the best one in the eyes of Allah, one step which is taken in the way of Allah and the other step which is taken towards such relative who wants to break the relationship. Please think that the step towards such relative who do not want to keep relationship , he /she wants to live on his own and you forget all of your ego and move towards him/her to keep the relationship alive and strong. It has very value in the eyes of Allah. 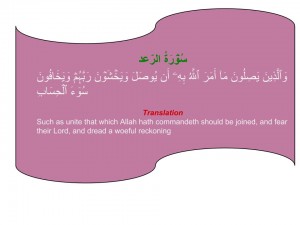 Either the relatives are from paternal side or the  relatives are from maternal side, either they are direct relatives such as uncle or aunty or they are relatives of second generation such as cousins or even third generations i.e the kids of the cousins of your parents are your relatives. You have to take care of them as per their relationship. The relatives with whom marriage is not allowed ( real uncle, real aunty , real brother , real sister etc ) are primary  and the relatives with whom marriage is permissible are secondary. Each and every relative has some rights on you. However the more closer is relationship the more is the responsibility.

Islam is a religion of peace and it forces to keep relationship strong. Supporting relatives is in good deeds and not in sins. You may guide someone towards right path if you have any relationship with him /her .  Our qualified staff is available for teaching of quran for kids . Practice is with knowledge, Your kids will grown as a good Muslim if he / she has basic knowledge. Join us for leaning quran.